ಪೋಸ್ಟ್ ಮ್ಯಾನ್ ರ ಕೆಲಸದ ಸಮಯದ time factor ನ್ನು ಇತ್ತೀಚಿಗೆ ಇಲಾಖೆಯು ಬದಲಿಸಿದ್ದು ಅದು ಅವೈಜ್ಞಾನಿಕ ವಾಗಿದೆ. ಈ ಬಗ್ಗೆ ಪೋಸ್ಟ್ ಮೆನ್ ಮತ್ತು ಗ್ರೂಪ್ ಡಿ ನೌಕರರ ಕೇಂದ್ರ ಸಂಘವು ತೀರ್ವ ಅಸಮಾಧಾನ ವ್ಯಕ್ತ ಪಡಿಸಿ ಇಲಾಖೆಗೆ ಕೆಲವೊಂದು ಮಾರ್ಪಾದುಗಳಿಗಾಗಿ ಒತ್ತಾಯಿಸಿದೆ. ಈ ಬಗ್ಗೆ ಕೇಂದ್ರ ಸಂಘದಿಂದ ಬರೆದ ಪತ್ರದ ಪ್ರತಿಯನ್ನು ಈ ಕೆಳಗೆ ಕೊಡಲಾಗಿದೆ.
P4 CHQ WRITES TO DEPARTMENT SEEKING MODIFICATIONS IN POSTMAN WORK NORMS
P4 CHQ HAS WRITTEN A LETTER TO DEPARTMENT OF POSTS SEEKING IMPROVEMENT / MODIFICATION IN THE POSTMEN WORK NORMS
The copy of letter in this regards written by Comrade Ishwar Singh Dabas General Secretary AIPEU Postmen & Group D CHQ to the Department is reproduced below for information:
No. P-IV/CHQ/Postman Norms/2010 Dated 22nd April 2010
To
The Deputy Director General [Estt]
Department of Posts
Dak Bhawan
New Delhi – 110001
Sub: Improvement in the Postmen establishment norms – regarding.
Ref: DoP Order No.9-1/2005-W.S.I/PE.I Dated 5.2.2010
Sir,
This Union is constrained to bring the following factors to your kind notice to seek necessary modifications / changes in the Revised Norms for Postmen Establishment:
1. Delivery of unregistered mail [other than multi-storied building] is given a time factor of 0.72 Minutes causing a reduction of 0.03 Minutes per letter. We have actually demanded upward revision to 1.00 Minute per article but however there is no scientific justification for reducing the existing time factor. The earlier time factor at least has to be restored.
2. Delivery of unregistered Mail in Multi-storied buildings has been given a time factor 0.42 Minutes after reducing the ad-hoc time factor earlier allowed viz., 0.77 Minutes. In fact despite instructions, all tenants in multi-storied buildings are not providing for letter-boxes in the ground floors. Therefore there is no need for providing separate time factor for letters pertaining to multi-stories buildings at present. The time factor allowed so far for letters without any distinction as general and multi-stories should be allowed to continue until such time that all tenants are keeping letter-boxes in the ground floor of the buildings.
3. Time factor for Customs Duty Articles are reduced from the existing 4.50 Minutes into 3.00 Minutes. This is highly unscientific since these articles also involve additional work including cash transactions. Therefore the earlier time factors of 4.50 which was also determined by the Work Study Unit in the year 2008 vide F.No.9-1/2005-IWSU/PE-I dated 7.10.2008 should be continued.
4. Time factor for Money Orders was 4.00 Minutes earlier which was reduced as 3.85 for Paid MOs and 2.50 Minutes for Unpaid MOs. This distinction as paid and unpaid is unnecessary since the calculations involved from the time of taking possession of MOs to making returns the work of the Postmen do not undergo any change. More over the reduction from 4.00 Minutes to 3.85 Minutes is also unscientific. The norms worked out by the Work Study Unit are to be revised once again restoring status-quo-ante.
5. The Time factor provided for distance travelled by foot as well as bicycles in congested areas is most unscientific. Earlier it was 18 Mts and 9 Mts respectively for foot and cycle and the increase of 1 minute only is not commensurate with the level of increase of congestion in traffic and people nowadays. It should be revised as 25 Minutes and 15 Minutes respectively for both Foot and Cycle in congested areas.
6. The time factor provided for Returns by Postmen viz., 0.20 Minutes is not commensurate with the new work added to Postmen. A minimum of 0.30 Minutes for Returns shall be provided for Returns.
7. Several new work are now and then added to Postmen like Sale of Postal Stationery; Collection of Data in separate forms; Collection of surplus cash from sub offices to HO; Collection of Electricity, Water Bills etc; Collection of Speed Post Articles etc and therefore the minimum Returns shall be 0.40 Minutes. No time factor has been finalised by the Work Study Unit for such works. It is necessary to decide separate work norms for such work items.
8. The time factor specified for different categories notwithstanding a ceiling specifying the maximum distance of a postmen beat should be fixed. Now there is no such crieteria and this is resulting in some beats with unscientific distances like more than 50 Kilometres. To cite an example we can point out that the distance of a beat in Delhi Sultanpuri Post Office is more than 50 Kilometres. No beat should be more than 13 Kilometres in urban areas and more than 16 Kilometres in rural areas. Forming beats beyond such a distance is unscientific. Such a restriction is to be incorporated into the Postmen establishment norms.
9. Similarly, appropriate distance factor and maximum number of articles to be entrusted shall be determined for the Speed Postman Beats also. At present no such norms are fixed and in many places the distance traversed by Speed Postmen is beyond reasoning. The number of Speed Post Articles also entrusted without any limit and thus resulting the total work hours per day is beyond 8 Hours, which is against the law.
10. Several new duties are now entrusted to Postmen as per the Directorate Order Dated 7.10.2008 under the head 'Revised Duties of Postmen / Delivery Staff' for which no time factor is specified. These new duties coming under Revised Duties are the work presently performed by Postal Assistants and therefore the same time factor in vogue for these items of work shall be included for the Postmen Work Norms also and the calculation of total work norms for Postmen establishment shall be determined taking into account these Revised Duties also. Comprehensive Orders in this behalf are to be issued by the Postal Directorate.
This Union would highly appreciate for your kind intervention for subjecting the above time factors for reconsideration and improvement.
Thanking you,
Yours faithfully,
Sd/-
[Ishwar Singh Dabas]
General Secretary
Posted by The Shimoga Post at 10:49 PM No comments: 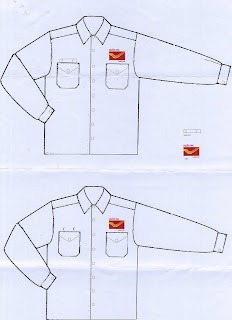 Posted by The Shimoga Post at 10:20 PM No comments:

Posted by The Shimoga Post at 10:38 PM No comments: 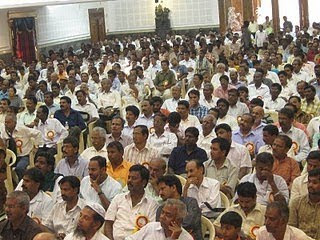 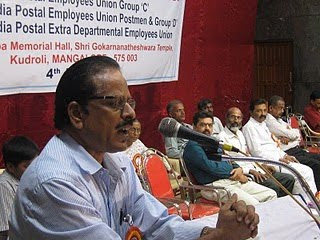 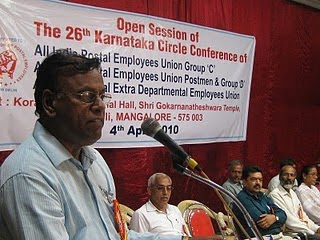 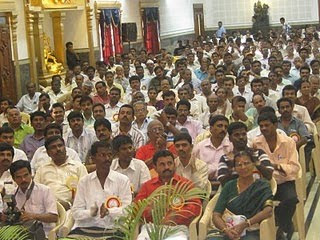 Posted by The Shimoga Post at 6:01 AM No comments:

Government has declared April 14th as general holiday on account of Birth day of
Dr.B.R.AMBEDKAR.
Posted by The Shimoga Post at 11:23 PM No comments:

Department of Posts has released the endorsement orders for the MOF Department of Expenditure orders for payment of 8% DA w.e.f. 1.1.2010.
Posted by The Shimoga Post at 11:19 PM No comments: