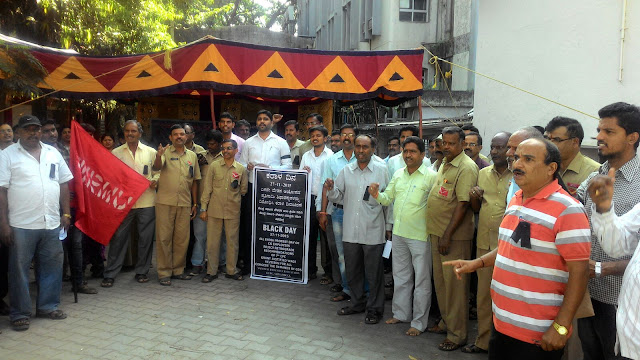 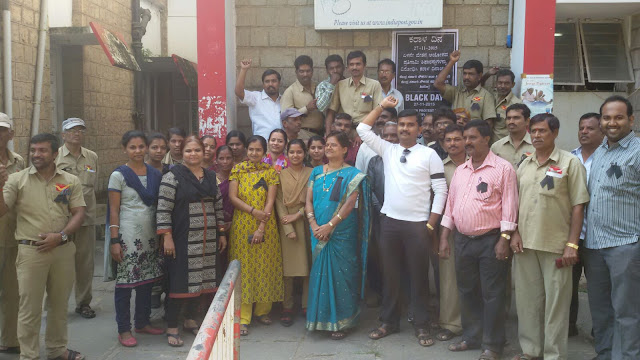 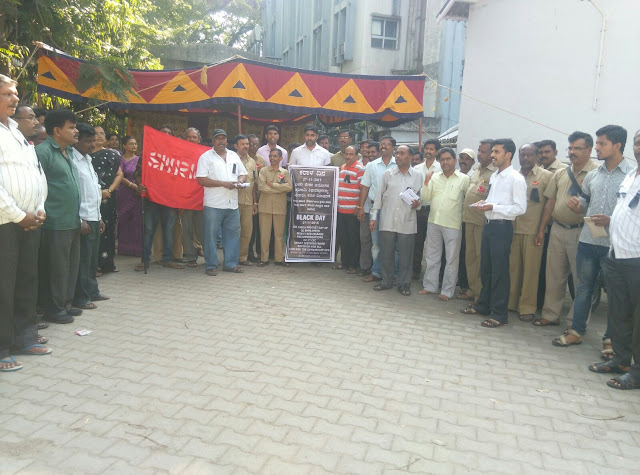 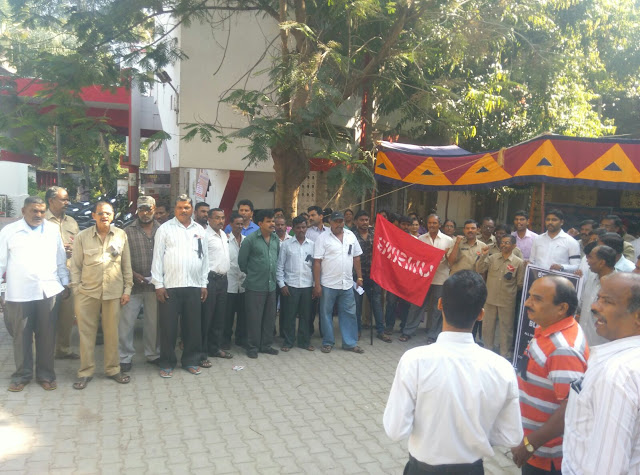 Posted by The Shimoga Post at 8:20 AM No comments:

LIST OF PROMOTION TO GRADE II AND LSG IN KARNATAKA CIRCLE 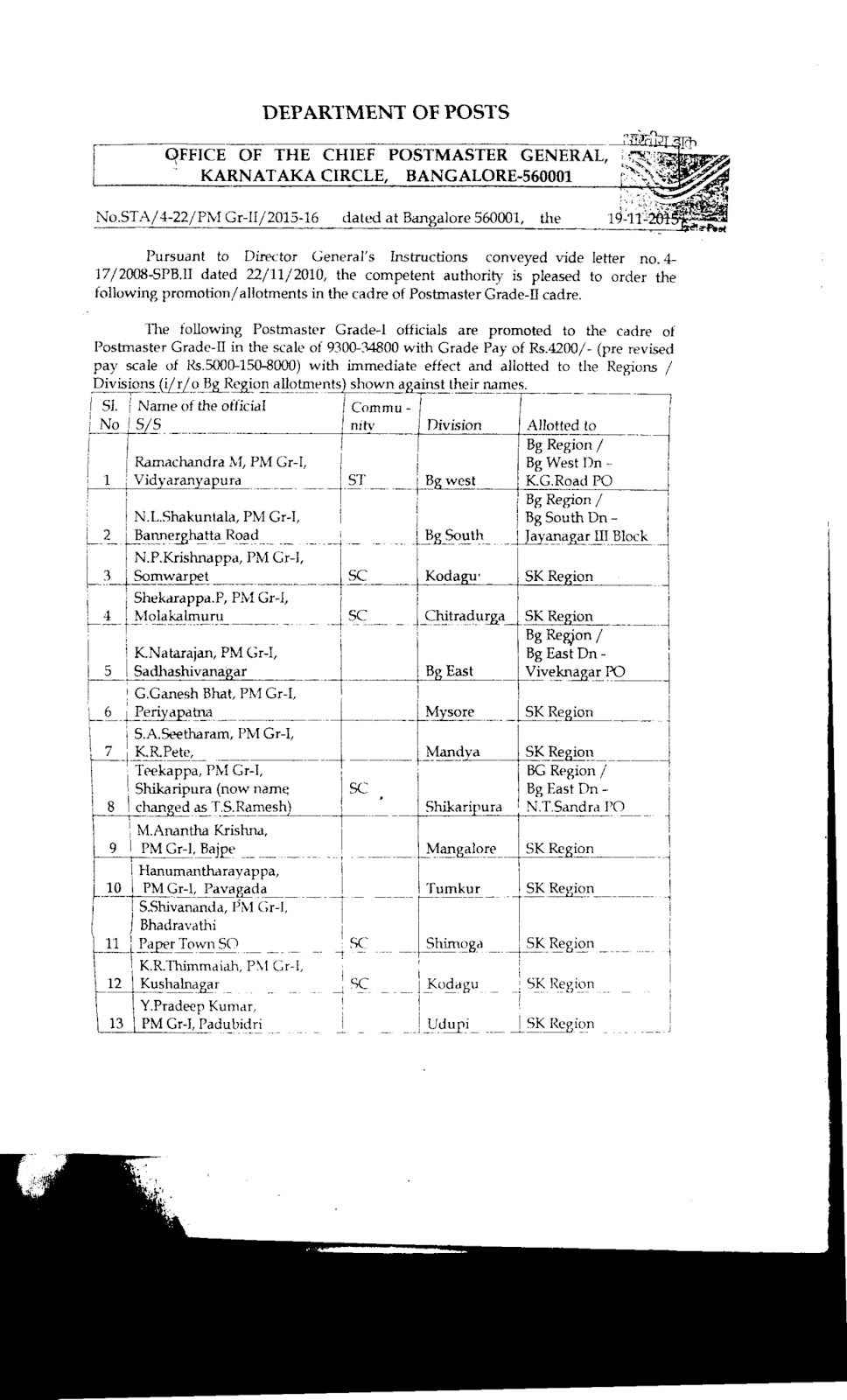 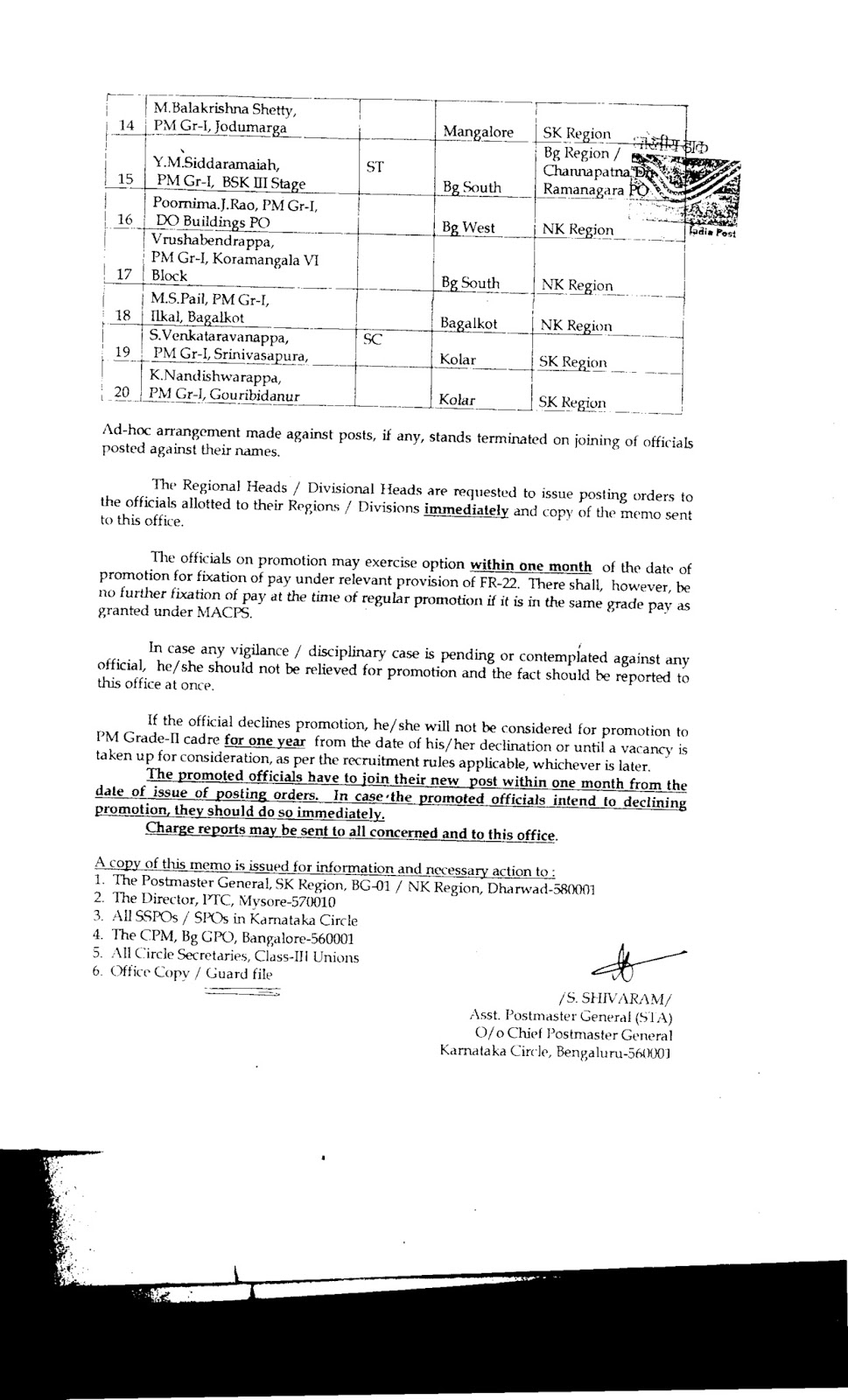 Posted by The Shimoga Post at 4:16 AM No comments: 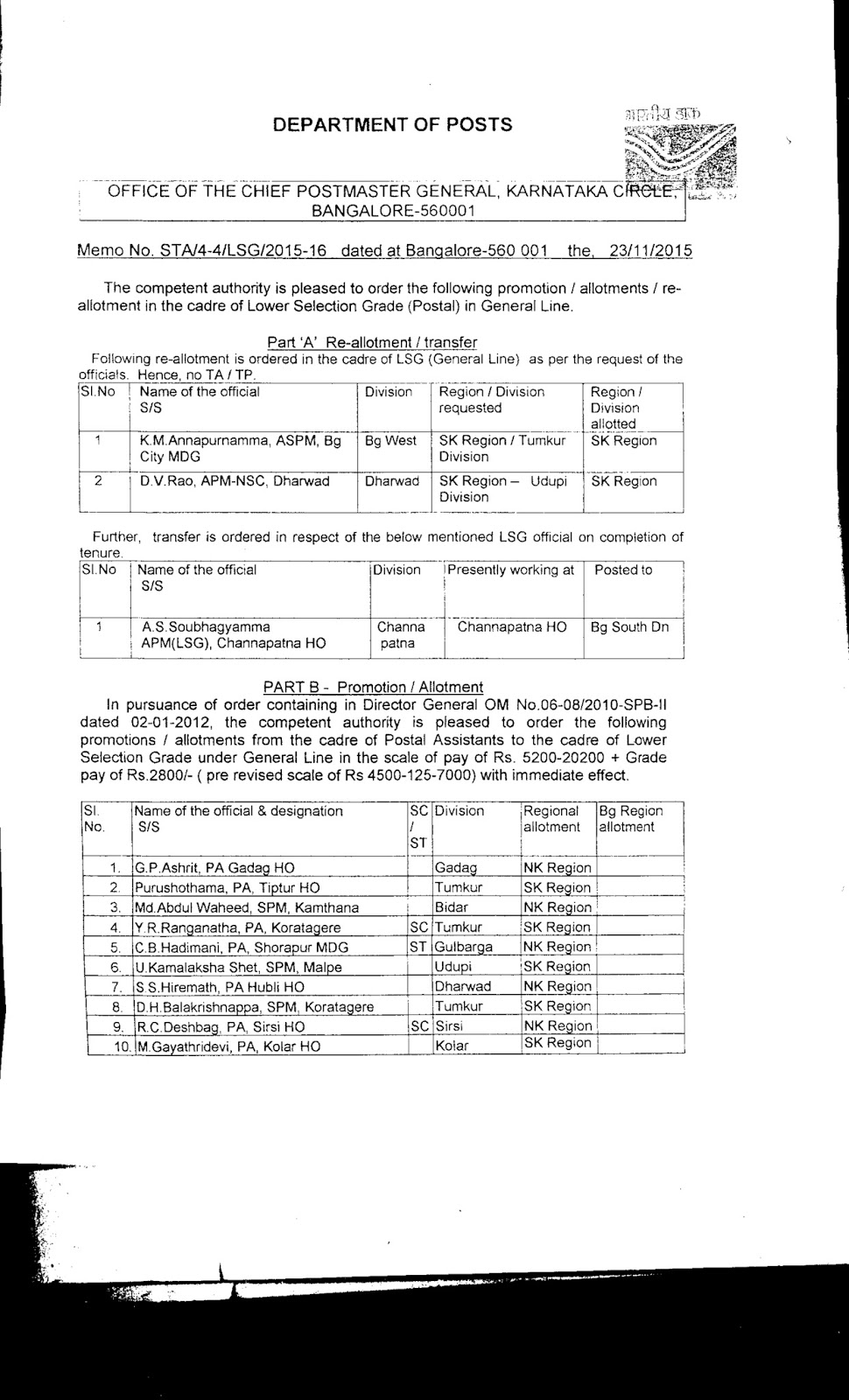 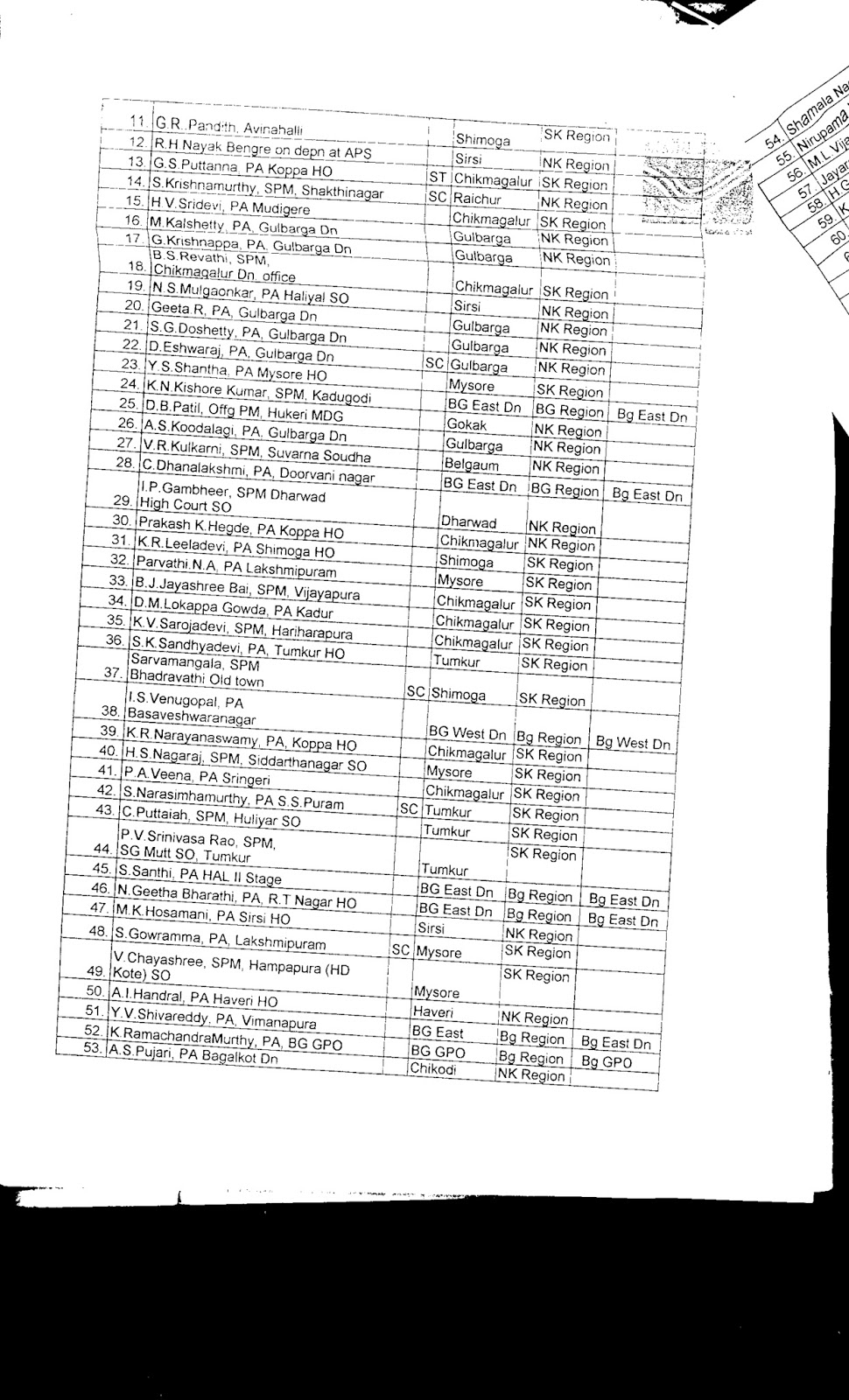 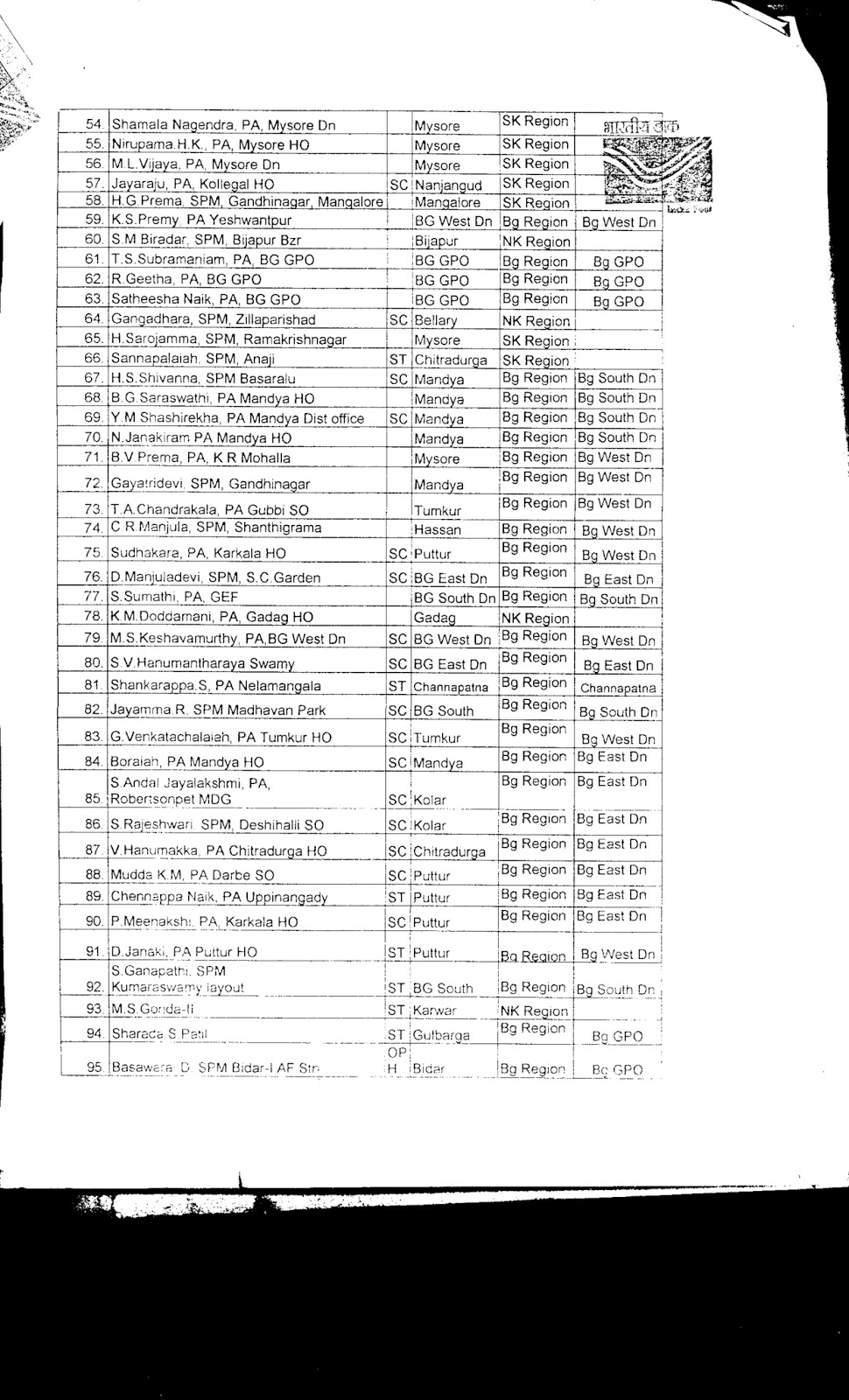 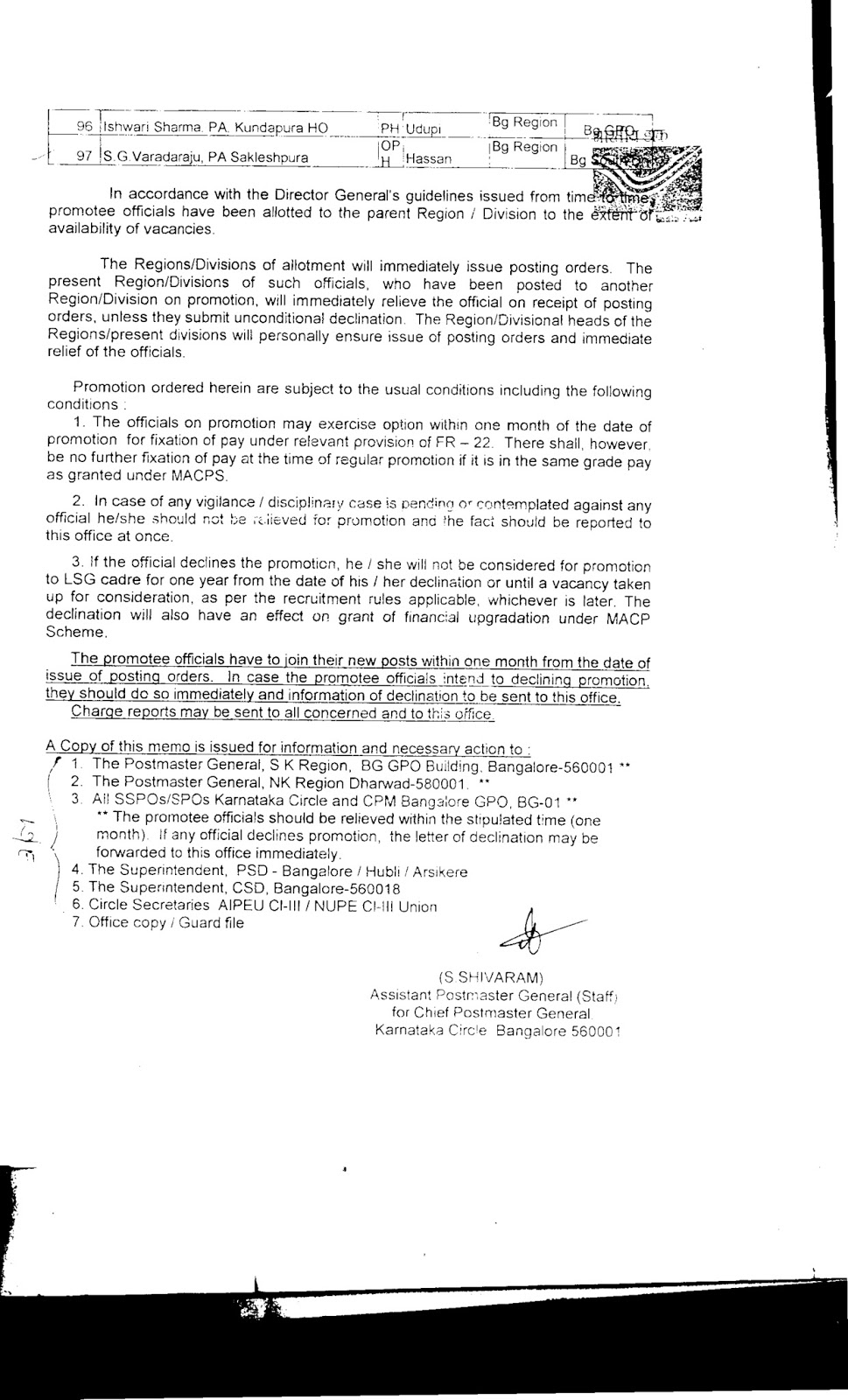 Posted by The Shimoga Post at 4:14 AM No comments: 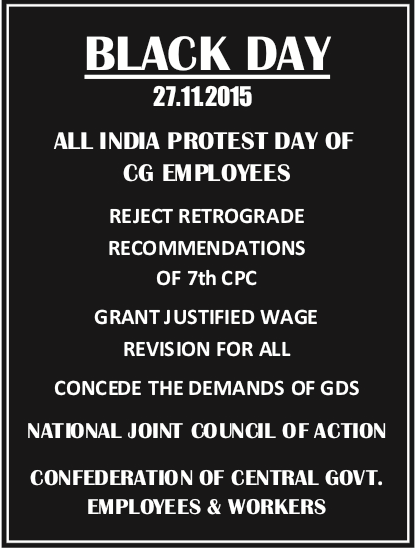 Posted by The Shimoga Post at 3:48 AM No comments:

While the 7th Pay Commission report recommendations have been a source of joy for hundreds of thousands of government employees, for the national trade unions linked to the Bharatiya Janata Party (BJP) and the Left, the hike has not been high enough and they have not kept quiet about it.

Trade unions have protested vehemently against the 7th Pay Commission and are looking for redressal of their grievances and contemplating action. They have also looked at strong industrial action to indicate their unhappiness and will be indicating soon what their future course of action can be. Here are the top 10 reasons why, they say, they are angry with the Seventh Pay panel report:

1. Proposed 7th Pay Commission hike is lowest in many decades and not in sync with inflation - least hike (proposed) in the last 30 years. Considering the inflation, it is unsatisfactory.

2. 7th Pay Commission has recommended a 16 per cent hike in net pay against projected 23.55 per cent.

3. There is a huge gap in maximum and minimum pay in the 7th Pay Commission report recommendations.

4. The gratuity ceiling recommended by 7th Pay Commission has been raised from Rs 10 lakh to Rs 20 lakh, the benefit of this will go to senior officials only.

5. 7th Pay Commission report has ignored sharp increase in prices justifying substantial upward revision in HRA and other allowances. Instead the commission has reduced rates of HRA from 30 per cent to 24 per cent of the basic pay in A Class cities and corresponding decrease in other cities which is a retrograde recommendation.

6. Doubts about the way the 7th Pay Commission has calculated the figures. For example, they calculated House Rent Allowance (HRA) at 3 per cent against the mandated 7 per cent.

7. As per commodity prices on Agriculture Ministry's website and on the basis of Labour Bureau data, the Basic Pay comes at Rs 11,341 while 7th Pay Commission calculation shows it at Rs 9,218. There is a lot of gap.

8. There is no clarity in the 7th Pay Commission report on the pay revision for lakhs of contract workers in government ministries as well as 3 lakh Grameen Dak Sewaks.

9. 7th Pay Commission is the only commission, which has reduced the allowances and due to which the growth in net income is only 14.28 per cent. (PTI).

NOTE: The 900-page report of the 7th Pay Commission headed by Justice A K Mathur was presented to Finance Minister Arun Jaitley with a recommendation that the new scales be implemented from January 1, 2016. The panel recommended a 14.27 per cent increase in basic pay, the lowest in 70 years. The previous 6th Pay Commission had recommended a 20 per cent hike, which the government doubled while implementing it in 2008.

Posted by The Shimoga Post at 3:21 AM No comments:

CLICK HERE FOR DETAILS/INDIA TODAY NEWS & MC NEWS
Posted by The Shimoga Post at 2:40 AM No comments:

CLICK HERE FOR DEPARTMENT OF POST FULL REPORT
CLICK HERE FOR PAY MATRIX- TABLE
7th Cpc Rejected all our demands directly, what is our next course of action?
MOST DISAPPOINTING AND RETROGRADE RECOMMENDATIONS

WORST RECOMMENDATIONS EVER MADE BY ANY PREVIOUS PAY COMMISSION
ONLY 14.29% INCREASE IN PAY AFTER 10 YEARS

(EQUAL TO TWO DA INSTALLMENTS)!!!
50 LAKHS CENTRAL GOVERNMENT EMPLOYEES AND DEFENCE PERSONNEL CHEATED & DECEIVED
HOLD PROTEST DEMONSTRATIONS ALL OVER THE COUNTRY
NJCA LEADERS MEETING AT DELHI ON 20.11.2015 AT 11 AM, WILL DECIDE THE FUTURE COURSE OF ACTION
SOME IMPORTANT HIGHLIGHTS :

TOTALLY DISAPPOINTING
POSTAL EMPLOYEES – ALL DEMANDS REGARDING ENHANCED WAGES AND SERVICE CONDITIONS REJECTED HOLD PROTEST DEMONSTRATIONS ALL OVER THE COUNTRY
Highlights of the 7th CPC for Department of Posts Employees :
Postal Services Board :
The Commission has examined the demand for granting apex level to the members of the PSB and is of the view that adequate functional justification for the same does not exist. ( Para 11.8.11)

The Commission however is no t in favour of creating an additional post of member to discharge the financial function and is of the view that the portfolios of the six members can be so re-arranged that the need to create a new post of Member is obviated. ( Para 11.8.12)
IPS (Group – A):
In so far as Director, National Postal Academy is concerned, the view taken is that functional justification from upgrading the post to Apex level does not exist. As far as the rest of the demands for upgradation / creation of posts are concerned, these are administrative matters, which may be taken up with the concerned departments in the government. ( Para 11.8.15)
Postmaster Cadre :
The Commission recommends that while 25 percent of the posts of Senior Post Master may continue to be filled up from Post Master Gr.III through seniority based promotions, eligible officers from the Post Masters’ cadre (Postmaster Gr.II and Postmaster Gr.III) may also be permitted to appear for LDCE along with Inspector (Posts) for the balance 75 percent of the Senior Postmasters’ posts ( Para 11.8.18)
Inspector Cadre :
The Commission, therefore, recommends that Inspector (Posts) who are presently in the GP 4200 should be upgraded to GP 4600. With this upgradation, Inspector (Posts) shall come to lie in an identical grade pay as that of their promotion post of Assistant Superintendent of Posts (ASPOs). A higher grade would thus need to be extended to ASPOs. Accordingly, the Commission recommends that the promotional post of ASPOs be placed in the next higher GP 4800 and further, the post of Superintendent (Posts), which is presently in the GP 4800, be moved up to GP 5400 (PB-2). ( Para 11.8.21)
Postal Assistants / Sorting Assistants / LSG / HSG-II / HSG-I:
The Commission is of the view that there is no justification for enhancement of minimum educational qualifications for Direct Recruits for Postal Assistants/Sorting Assistants from Class XII to Graduation and the entry grade pay from GP 2400 to GP 2800. No justification for upgrading LSG, HSG-II & HSG-I (Para 11.8.23 & 11.8.24)

Postman :
The Commission has noted the entry level qualifications prescribed (Class X or ITI for MTS) as also the work content, and is of the view that there is no justification for further raising the entry grade pay of Postman. ( Para 11.8.29)

Mail Guard :
As no modification in the grade pay of Postman is recommended, the Mail Guard shall also be placed in same pay level. ( Para 11.8.33)

Multi Tasking Staff :
No upgrade is considered necessary for either MTS-domestic or MTS-foreign posts. ( Para 11.8.37)

Binders :
There is no justification for raising the entry grade pay as sought. ( Para 11.8.39)

Artisans :
The Commission is of the view that no anomaly exists in the present pay structure of these posts. The cadre of artisans in the Department of Posts shall accordingly be extended only the corresponding replacement level of pay. ( Para 11.8.43)

Translation Officer :
The Commission, therefore, suggests that a comparative study of the job profiles be carried out by the department to arrive at the precise job content and a view taken thereafter. ( Para 11.8.45)

Technical Supervisors :
No upgrade is recommended. (11.8.47)

Gramin Dak Sewaks:
The Commission has carefully considered the demand and noted the following:
a. GDS are Extra-Departmental Agents recruited by Department of Posts to serve in rural areas.
b. As per the RRs, the minimum educational qualification for recruitment to this post is Class X.
c. GDS are required to beon duty only for 4-5 hours a day under the terms and conditions of their service.
d. The GDS are remunerated with Time Related Continuity Allowance (TRCA) on the pattern of pay scales for regular government employees, plus DA on pro-rata basis.
e. A GDS must have other means of income independent of his remuneration as a GDS, to sustain himself and his
Government of India has so far held that the GDS is outside the Civil Service of the Union and shall not claim to be at par with the Central Government employees. The Supreme Court judgment also states that GDS are only holders of civil posts but not civilian employees.

Separate Cadre for S As / M Es :
System Administrators and Marketing Executives have demanded creation of separate cadres with higher pay scales. Presently incumbents of these posts are drawn from the cadre of Postal Assistants/Sorting Assistant Cadre.

The V and the VI CPC have also dealt with this issue and have not recommended separation of cadres. The Commission also does not see any rationale for creating separate cadres. (Para 11.8.51 & 11.8.52)

4.    FIXATION ON PROMOTION – NO CHANGE – ONLY ONE INCREMENT IN THE OLD SCALE
JCM (SS) demand – Minimum two increments fixation.

25.          PERFORMANCE RELATED PAY SHOULD BE INTRODUCED IN GOVERNMENT SERVICES AND ALL BONUS PAYMENT SHOULD BE LINKED TO PRODUCTIVITY.
JCM (SS) demand – No Performance related Pay. Productivity Linked Bonus for all.

26.          COMPULSORY RETIREMENT AND EFFICIENCY BAR REINTRODUCED
Failure to get required bench MarK for promotion within the first 20 years of service will result in stoppage of increment. Such employees who have out lived their ability, their services need not be continued and the continuance of such persons in the service should be discouraged.

27.          PROMOTEE AND DIRECT RECRUITS – ENTRY LEVEL PAY ANOMALY IS REMOVED
JCM (SS) demand – the differential entry pay between new recruits and promoted employees should be done away with.

28.          CADRE REVIEW TO BE COMPLETED IN A TIME BOUND MANNER.
Commission recommended to hasten the process of cadre review and reduced the time taken in inter-ministerial consultations.

32.          PENSIONERS – PARITY – LONG STANDING DEMAND OF THE PENSIONERS ACCEPTED
Commission recommends a revised Pension Formulation for Civil employees and Defence Personnel who have retired before 01.01.2016. (expected date of implementation of seventh CPC recommendations). This formulation will bring about complete parity of past pensioners with current retirees.

36.          CGHS FACILITIES TO ALL POSTAL PENSIONERS RECOMMENDED
33 Postal dispensaries should be merged with CGHS

37.          GRAMIN DAK SEVAKS (GDS) OF THE POSTAL DEPARTMENT DEMAND FOR CIVIL SERVANTS STATUS REJECTED
Recommendation: - The committee carefully considered the demand for treating the Gramin Dak Sevaks as civil servants at par with other regular employees for all purposes, and noted the following:
(a)       GDS are Extra-Departmental Agents recruited by Department of Posts to serve in rural areas.
(b)       As per the Recruitment Rules the minimum educational qualification for recruitment to this post is class X.
(c)        GDS are required to be on duty only for 4 to 5 hours a day under the terms and conditions of their service.
(d)       The GDS are remunerated with Time Related continuity Allowance (TRCA) on the pattern of pay scales for regular Government employees plus DA on pro-rata basis.
(e)       A GDS must have other means of income independent of his remuneration as a GDS to sustain himself and his family.
Government of India has so far held that GDS is outside the Civil Service of the Union and shall not claim to be at par with the Central Government Employees. The Supreme Court Judgment also states that GDS are only holder of Civil posts but not civilian employees. The Commission endorses this view and therefore has no recommendation with regard to GDS.
Posted by The Shimoga Post at 2:36 AM No comments: