Comrade R.G.Savanur is no more.

The dedicated leader, everlasting guiding spirit of Karnataka breathed his last today afternoon during his visit to Dharwad. After attending a family function he was relaxing and death followed him within no time. His unmatchable wisdom, dedication, service to the postal community is unforgettable. His loss cannot be filled. MAY HIS SOUL REST IN PEACE. 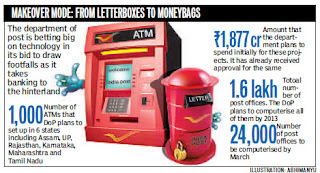 The Department of Post (DoP) is on a technology upgrade drive. The department plans to set up 1,000 automated teller machines (ATMs) across six states —Assam, Uttar Pradesh, Rajasthan, Maharashtra, Karnataka and Tamil Nadu — as part of its ongoing modernisation drive, said Manjula Parasher, secretary, posts.
“We will start execution of our modern technology programme across six circles by the end of this year,” said Parasher. “This will help in people getting core banking facility etc. We plan to have 1,000 ATMs in a phased manner. The process for this will start by the year-end.”
The DoP has selected five major technology companies for five of its technology advancement projects.It has issued a Letter of Intent to Infosys for two projects including rural system and financial services integration; Tata Consultancy Services for change management; Sify for network integration and Reliance Communications Infrastructure for data centre.
The department plans to start execution of some of these projects by end of this year across six states on a pilot basis.It has already received approval for Rs 1,877 crore to be spent across these projects over a period of two years and will seek additional funds when the need arises.“Funds of Rs 1,877 crore have been approved,” said Parasher. “We will go ahead with that. We may need more money because implementation in some of the cases may last over six-nine years.”The department will computerise all of its 1.6 lakh post offices across the country by 2013 with over 24,000 department post offices already computerised by March.
250 computerised post offices in J-K
With an aim of providing better services to the people, the DoP has decided to computerise at least 250 post offices in Jammu and Kashmir during the current year. “During this year, the department has taken the ambitious plan of computerising 250 post offices and modernising them to make them relevant,” said John Samuel, chief postmaster general, J&K Circle. PTI/Srinagar
Source : http://www.hindustantimes.com
Posted by The Shimoga Post at 12:08 AM No comments:

Com.Nagaraj, Steno to SPOs, Shimoga is qualified in the IPO examination held recently. He has stood in NO 1 position in Karnataka Circle. The Shimoga Post and team congratulate him on his success and wishes him a bright future.
Posted by The Shimoga Post at 10:13 PM No comments:

Posted by The Shimoga Post at 4:52 AM No comments: