Dear ComradesCVC vide its circular No.02/01/2016 dated 18.01.2016 clear guidelines have been issued on timely completion of disciplinary proceedings/departmental inquiry proceedings. The same is placed here for the information of the members. 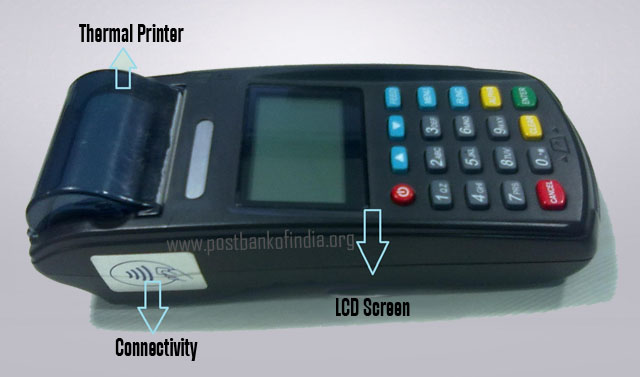 As a pilot phase, Department of Post has started using solar powered, biometric hand-held devices in rural post office with connectivity along with the application software in selected circles viz. Bihar, UP and Rajasthan. This move was the outcome of Rural ICT project declared by the Government of India.


1.  Electronic transactions- Booking and delivery of Speed Post, registered mail, money orders, sale of stamps and postal stationery will be done through these devices and paper receipt shall be generated

3.  Immediate uploading of transaction data and financial reconciliation- Using mobile connectivity, data pertaining to all transactions done on the hand-held devices shall be uploaded onto the central server. E-Money order will reach the destination post office instantaneously unlike present day where the money order is digitized at the nearest computerized Post Office and leads to delay in delivery. All financial transactions shall also be reconciled immediately without any manual intervention and Cash on Delivery amount collected in the village shall be immediately credited to the account of e-Commerce Company. Similarly the artisans would be able to fulfill e-commerce orders and receive immediate payment for their sold products online. This will have a positive impact on the overall economy of the villages.

4. Automatic track and trace- Speed Post and Registered letters/parcels and money remittances will be trackable at the Branch Post Office level and booking/delivery information will also be uploaded to central server immediately.

5. Fraud and leakage elimination- As Savings Bank and Postal Life Insurance transactions will be done on a real-time basis and through immediate generation of receipt and voice message, chances of fraud would be eliminated. Biometric authentication of MNREGS and social security beneficiaries at the time of pay-out would also reduce leakage in the schemes.

NO BPM POST SHOULD BE COMBINED WITH MD OR MC WORK ; THE MD/MC POSTS SHOULD BE FILLED UP ON REDEPLOYMENT OF SURPLUS/ SKELETON POSTS- DEPARTMENT ISSUED ORDERS 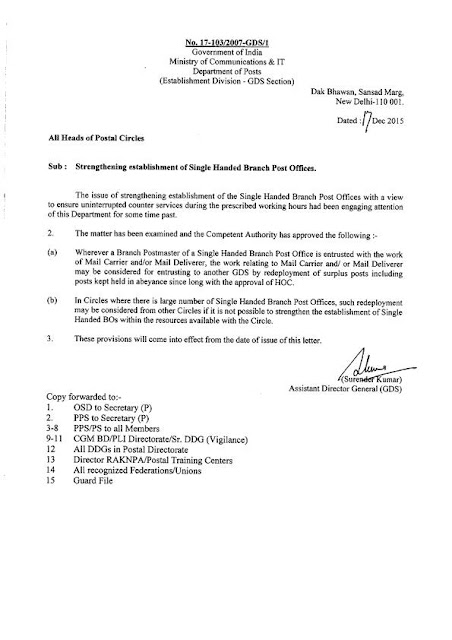 Posted by The Shimoga Post at 4:04 AM No comments:

Report On Pay Commission Recommendations To Be Submitted By June

Cabinet Secretary P K Sinha (pictured) is head the Empowered Committee of Secretaries (CoS) for processing the report of the Seventh Central Pay Commission.
The Seventh Pay Commission took 21 months to finalize the report and now the secretaries committee will take the next four to five months to review it.
The Empowered Committee of Secretaries, who will screen the Seventh Pay Commission’s recommendations to send their review to increase in basic pay for all government employees in the region of 18-20% instead of 16%, which was recommended by the Pay Commission.
Finance Ministry officials said the lower grade salaries might see a slight increase due to the commission’s recommendations in this segment is the lowest in 70 years.
“If the increase was high, it would cast a huge impact on the budget outlay. So, the increase should be little,” said an official.
There  will be no change made in highest salary while the lowest salary will be Rs 20,000 instead of the proposed Rs 18,000, said an official.
The Pay Commission also recommended for abolition of allowances and advances like risk allowance, small family allowance, festival advance, motor cycle advance.
The advantages and disadvantages of the matter will also be discussed in the review meeting.
The first meeting of Empowered Committee of Secretaries to review the commission’s report is scheduled tomorrow.(2.2.2016).
“After the first meeting, the Empowered Committee will seek suggestions from all the stakeholders for drafting of their report on the Seventh Pay Commission recommendations to address the concerns of central government employees in an effective manner,” the official said.
Accordingly, there is a high possibility that a number of points made in the report may be amended or struck off by the empowered committee for convincing every section of central government employees.
So, the Empowered Committee will need more time to convince every stakeholder before its final nod.
Posted by The Shimoga Post at 4:03 AM No comments: